A complete guide to sailing on the Solent: Part 2 – the top things to see and do on a south coast yacht charter

In part one of our complete guide to sailing on the Solent, we looked at the basics you’ll need to know before you charter around one of the UK’s most iconic sailing grounds, including what the weather is like, how to get there and the best anchorages (according to us!). In part two, we take a look at the top places to visit on the Solent while on a yacht charter holiday. 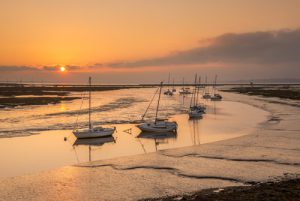 West of Beaulieu the small port town of Lymington has a wide range of exciting things to see and do for all the family. The open air Lymington sea water baths are great for a day of fun and adventure with an array of adventurous water sports to take part in, including aqua jousting  and an on-water obstacle course.

For those interested in history, pay a visit to the St Barbe Museum and Art Gallery, home to a number of art exhibitions and a selection of historical artefacts from the surrounding New Forest area.

We also recommend spending some time exploring Hurst Castle, an artillery fort and English Heritage site established by Henry VIII, which offers spectacular views out over the Isle of Wight. 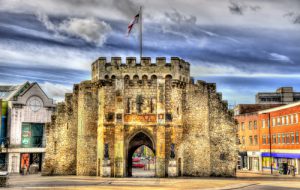 Head out of Hamble River, turn to starboard and head towards the city of Southampton, home to the UK’s biggest cruise port and, more famously, the departure point for the ill-fated Titanic in April 1912. Due to the city’s historical significance, a visit to the SeaCity Museum is an absolute must, particularly for those interested in all things nautical.

For those interested in the history of aviation, visit the Solent Sky Museum where you can explore  over 20 historical aircraft including the Submarine Spitfire and learn all about Southampton’s contribution to The Great War from 1914-1918.

The city is also home to one of the south coast’s biggest shopping centres, West Quay, with over 130 shops and a range of restaurants to peruse and enjoy. 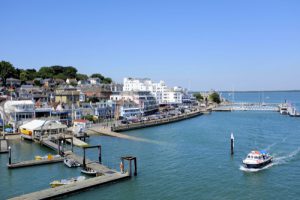 No yacht charter on the Solent would be complete without a trip to the nautical town of Cowes on the Isle of Wight. Explore over 50 old and new vessels at the Classic Boat Museum, including yachts, powerboats and lifeboats and learn all about the town’s incredible maritime history. For those interested in the Island’s heritage, visit the Wight Military and Heritage Museum, where you can see several exhibits from land armoury to military artefacts dating back decades.

If you are visiting with children, take a wander from Cowes to Gunard along the famous coastal path. The path takes you along some of the prettiest paths of the Isle of Wight, and finishes on the cliff top above Gurnard Bay, where the views back over to the mainland are spectacular. 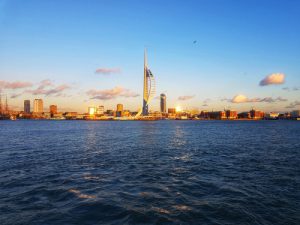 Head east from Hamble and sail to the maritime city of Portsmouth. Bathed in rich, naval history and home to HMS Victory, the Royal Navy flagship captained by Lord Nelson during the Battle of Trafalgar in 1805, HMS Warrior and the Mary Rose, the city’s Historic Dockyard is a must for visitors.

“The beauty of the Solent is that pretty much no matter what conditions you have there is somewhere that you can still get afloat. Be it Portsmouth harbour for the natural shelter it offers and the obvious attraction of Gunwarf Quays to the other end of the scale and the other end of the Solent and Newtown creek, a huge nature reserve where seals are regularly spotted and sea eagles have just been released.” – Martin, Fairview Sailing skipper

If you’re looking to enjoy a spot of designer shopping, Gunwharf Quays are perfect for you. With shops including HUGO BOSS, Diesel, Cath Kidston and Gant, and a number of popular restaurant chains, you can spend a whole day breaking the bank in the popular shopping precinct. 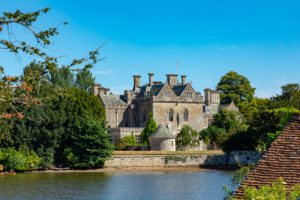 Sail around 10nm West from Port Hamble and arrive in the beautiful village of Beaulieu on the edge of the New Forest National Park. This quaint location will transport you back in time with its rich history and pleasantly conserved natural surroundings.

Pay a visit to Beaulieu Abbey, where, during the early 1200s, approximately 30 monks lived after the magnificent building was founded by King John and spend an afternoon exploring Buckler’s Hard, diving in and out of its old cottages and learning about the boat yard’s maritime history and secrets!

If you’re a fan of Top Gear, stop off at the National Motor Museum, where you can see over 250 old and new cars and motorbikes, some of which have been featured on the BBC car show.

Top things to do on the Solent

Portsmouth Historic Dockyard is home to some of Britain’s most significant maritime history and whether you have an interest in naval warfare or not, a visit here is essential when on a yacht charter on the Solent. From the excavated remains of Henry VIII’s flagship, The Mary Rose, to Britain’s most significant warship, Lord Admiral Nelson’s HMS Victory, the Dockyard is full of naval history going back to the Tudor times. 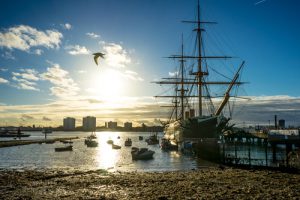 Head out on the water and over to Gosport to the Submarine Museum where you can step on board HMS Alliance, the only remaining World War II submarine still standing. While on the water, take a tour of the Harbour, where you’ll enjoy views of the Spinnaker Tower and the Royal Navy’s main UK base, HMNB Portsmouth, where, if you’re lucky, you might catch a glimpse of some of Her Majesty’s finest fleet members, including frigates and destroyers.

If you are visiting with family, head inside Boathouse 4 or Action Stations, where you’ll find a whole host of exciting fun and games including mast climbing and laser quest.

Sail past The Needles on the Isle of Wight

If you are visiting the Isle of Wight while enjoying a yacht charter on the Solent, we highly recommend heading to the most westerly point and visiting the magnificent natural chalk formations that jut spectacularly from the sea, The Needles. The three pillars of white chalk close to Alum Bay, protrude around 30m out of the waters surface and can be seen up close on an organised boat trip from The Needles attraction park ashore. 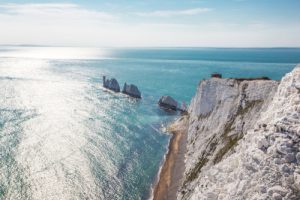 Once you have been on board and marvelled at the sheer amazingness of these breathtaking objects, enjoy a few hours exploring the different attractions on land. Fill empty glass shapes with some of the multi-coloured sand from Alum Bay, watch glass blowers at Alum Bay Glassworks or hop on some of the rides available for kids of all ages, including water waltzers, tea cups and the famous Needles chairlift (weather permitting).

Head along Beaulieu River and pay a visit it Buckler’s Hard, one of the south coast’s most visited attractions. Located in the 9,000-acre Beaulieu Estate, owned by the Montgu family, Buckler’s Hard will have you feeling like you’ve stepped back in time!

Go ashore and visit some of the stone cottages that line the banks, including the Shipwright’s Cottage, discover the role that the village played in Britain’s shipbuilding history or enjoy talks from the living history characters. If you are visiting with children there are plenty of activities for them to enjoy too, from the quiz trail to learning how to bowline. The site also has a lovely cafe, perfect from afternoon tea while looking out over the river.

Take a wander along Solent Way

If you fancy something a little less organised, a wander along Solent Way is the perfect activity for you. The 60-mile long coastal path runs between Milford-on-Sea and Emsworth and ensures beautiful views of the south coast of England, passing some of the area’s most stunning locations . 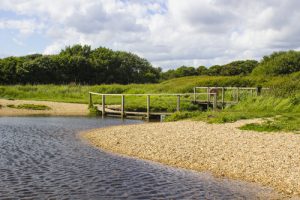 Choose to walk specific segments of the path, perhaps venturing from Milford to Lymington where you’ll be rewarded with breathtaking views of the Isle of Wight and The Needles or from Lymington to Beaulieu, a ten-mile route that passes through the tranquil surroundings of the New Forest. This free activity is great for all the family and if you are a keen birdwatcher or wildlife fanatic, you’ll be delighted to see some of the area’s most beautiful birds and animals.

Discover the history of the Titanic at Southampton’s SeaCity Museum

If you are interested in the history and mystery surrounding the UK’s most famous cruise liner, the Titanic, head to Southampton’s SeaCity Museum. The exhibit is the main attraction at the museum and tells the story of the effect that the sinking of the Titanic had on the people of Southampton. 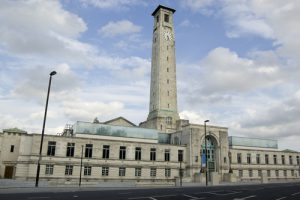 The museum houses a 1:25 scale interactive model of the ill-fated vessel that tells the story of her sad life, from her build in Dublin to her arrival in Southampton just days before she set sail on her first and only journey across the Atlantic Ocean. The museum pays respects to some of the hundreds of lives lost when this magnificent passenger liner foundered in the early hours of 15th April 1912, many of who were residents of Southampton itself and joined the Titanic as crew looking for a new life in America.

Fun facts about the Solent

To find out more about chartering a yacht on the Solent, contact us today on 02380 457023 or email info@fairviewsailing.co.uk

Read next article: Part three – The best places to eat and drink on a Solent yacht charter

Meet our fleet – What yachts can you choose from when sailing with Fairview?

Meet our fleet – What yachts can you choose from when sailing with Fairview?

Menu
We use cookies on our website to give you the most relevant experience by remembering your preferences and repeat visits. By clicking “Accept”, you consent to the use of ALL the cookies.
Cookie settingsACCEPT
Manage consent

This website uses cookies to improve your experience while you navigate through the website. Out of these, the cookies that are categorized as necessary are stored on your browser as they are essential for the working of basic functionalities of the website. We also use third-party cookies that help us analyze and understand how you use this website. These cookies will be stored in your browser only with your consent. You also have the option to opt-out of these cookies. But opting out of some of these cookies may affect your browsing experience.
Necessary Always Enabled

Any cookies that may not be particularly necessary for the website to function and is used specifically to collect user personal data via analytics, ads, other embedded contents are termed as non-necessary cookies. It is mandatory to procure user consent prior to running these cookies on your website.